In his book, “American Nations: A History of the Eleven Rival Regional Cultures of North America”, author and journalist Colin Woodard analyzes the different “cultures” that make up the United States of America. What he found was that E Pluribus Unum is more accurate than we originally thought. 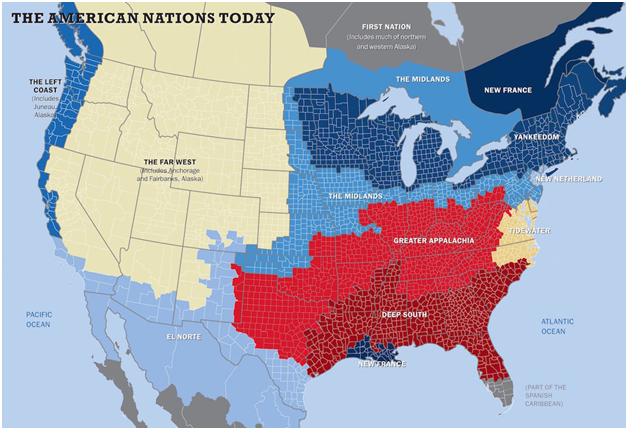 What Woodard found was that the America we know and love today can actually be sub-divided into 11 different “countries”, each with its own unique culture, mindset, people, economy, etc. Seeing American culture divided in this way really makes one wonder: how is it possible to be so different from our fellow Americans, and yet share so many similarities and be part of the same flag? It’s one of those things that really makes one appreciate the diversity and sheer magnitude of this country.

Although the theory has been around for quite some time, Woodard’s model is one of the most comprehensive and accepted amongst sociologists and historians (although it isn’t without its naysayers!).

Some regions might sound familiar: the “Deep South” has been around since the beginning of the 20th century, while other terms like “Yankeedom” and “Tidewater” are recent inventions.

We take a look at Woodard’s imagined America, and we delve deeper into each region’s distinct personalities:

In Woodard’s book, the First Nation is a sovereign state in North America that is mostly comprised of native groups that resisted settlement by Europeans. It is the largest, albeit sparsely populated, region of Woodard’s North America. The First Nation’s lands stretch from the harsh Arctic Circle, including Alaska and all across northern Canada.

Their economy is largely based on agriculture, fishing, and trade. Their widespread migration ensures that they keep their population at a minimum. Their government would most likely comprise of a tribal council made up of the elders of various tribes.

The area that is now New Orleans and Quebec are what Woodard calls New France. It is a progressive hub of culture and economy, driven by egalitarian views and social consciousness, thanks in part to the original French settlers who brought the ideas of the ancien régime and intermixed it with the beliefs of the indigenous peoples there.

The people of New France are very diverse and largely liberal, perhaps the most so in the entire continent. They are down-to-earth and tolerant of most (if not all) cultures. Their ideas of a consensus-based democracy means they have a high trust rating of their government, giving them a positive view of government involvement in the economy.

In the northeast, the areas that make up New York City, northern New Jersey, and large parts of Connecticut comprise a country Woodard calls New Netherland. Originally settled by the Dutch, the region retained many of the things that made their namesake a beacon of hope in the West: liberal attitudes toward other cultures, a sacred view of scientific inquiry and knowledge, a socially-driven government where people are encouraged to take part in, and a ready acceptance of immigrants from around the continent and the world.

Because of its proximity to the Atlantic and the immigrant-centric population, New Netherland is the regional leader for commerce and is the focal point of the North Atlantic’s trading hub, not to mention one of the major ports of the global economy.

The country of Yankeedom comprises most of the northeast coast from upstate New York and all of New England, to the industrial Midwest region of Pennsylvania to Minnesota. Founded by Puritans, the people of Yankeedom are conservatives who put a large amount of trust in their government.

Despite their conservative, and well, Puritan, views of the world, Yankeedom still holds immigration and scientific education in the highest esteem. They also highly encourage citizens to participate in government. Because of their faith, the Puritan society of Yankeedom is focused on creating a perfect earthly civilization, which they accomplish “through social engineering, denial of self for the common good, and assimilation of outsiders,” says Woodard.

The coastal region of North Carolina, Virgina, and Maryland comprise the country of Tidewater, a feudal society that once embraced slavery and values authoritarian governments and traditions. This means that citizen participation in government matters is discouraged, while the ideals of equality and egalitarianism are not prioritized.

Although once an industrial hub of the continent, its power has started to wane, thanks in part to urban expansion in neighboring countries as well as the “expanding federal halos around DC and Norfolk.”

As one of the more historically-recognizable regions in Woodard’s map, the Deep South spans all of South Carolina (with parts of rural North Carolina), Georgia, Alabama, Mississippi, parts of northern Florida and northern Louisiana, as well as a substantial portion of east Texas.

Although the country now operates as a democracy, it can trace its roots to a slave society, particulary slaves that settlers brought from the West Indies. Traditional Deep South ideals reserved democracy as a privilege for whites, while everyone else was destined for a life of servitude.

Despite outside forces putting an end to the Deep South’s caste system, the country still holds certain ideals from that time: a preference for small government, less taxes on the wealthy, fewer corporate regulations, and an active resistance against federal power.

Stretching from the Quaker Territory of Delaware and Pennsylvania and stretching across the entire Midwest from Ohio, Indiana, and Illinois, and encompassing the Plains states of Iowa, Nebraska, Kansas, and even including parts of New Mexico, the Texas Panhandle, and Oklahoma, the Midlands is the third largest sovereign state in Woodard’s map.

In the real world, this region is known as Middle America, or the Heartland, and is considered a major swing region, thanks in part to the areas politically moderate views which are driven by its ethinic diversity.

In Woodard’s book, the country of Midlands retains most of the personality of its real-life counterpart, particularly its large focus on the middle class. It is a pluralistic society that models most of its government policies and economy on what would benefit the ordinary people. It rejects top-down government intervention, preferring to deal with internal problems from a community standpoint befor escalating to higher authorities.

Unlike most of the continent, its proximity to Spanish America gives El Norte a distinctly Hispanic flavor that is worlds apart from the rest of North America. El Norte covers the areas of southwestern Texas, as well as the border states of Arizona, New Mexico, and California.

Woodard writes that the people of El Norte “have a reputation for being exceptionally independent, self-sufficient, adaptable, and focused on work.” As a country that has withstood assimilation by other European settlers and revolting from their mother country of Mexico, El Norte is known to foster revolutionary sentiments that are primarily fixed on creating democratic reform.

Comprising the real-life states of southwestern Pennsylvania, West Virginia, and most parts of Arkansas, Tennessee, Kentucky, and parts of Oklahoma and Texas, Woodard’s Greater Appalachia is centered on mountain living, with their values leaning towards personal liberty and individual sovereignty. The harshness of the region has forged a warrior ethic in the people of Greater Appalachia, and they use this to actively resist federal overreach.

Greater Appalachia has scarce resources, which makes its people extremely suspicious of rich lowlanders from the Midlands and the book-smart Yankees with their social engineering.

Comprising almost 90% of the Western seaboard of North America, the country of the Left Coast comprises the Pacific coasts of California, Oregon, Washington, coastal British Columbia, all the way to Juneau.

Settled by New Englanders and Appalachians, the Left Coast was able to create unique culture that blended the utopian ideals of the Yankees while retaining most of the Appalachian values of personal liberty and self-expression.

It is a major cultural hub of the entire continent, and one of the largest producers and exporters of culture and is usually the entry point of immigrants from Asia.

Comprising the Great Plains and the Mountain West areas of the eastern halves of Washington, Oregon, and California, and most areas of the western Dakotas, Nebraska, Kansas, Montana, Wyoming, Colorado, Utah, Idaho, Nevada, Arizona, New Mexico, the Far West is the second largest sovereign state in Woodard’s North America.

In its early days, the Far West was settled by laborers under orders from big-city corporations in the east coast. This created a population that was historically oppressed by capitalists and corrupt politicians, creating a general resentment towards federal government. As a nation, they prefer smaller government and personal liberties.

Although mostly a fantasy, most of Woodard’s book is rooted in observable statistics and real cultural touchpoints. Far from being an attempt to divide us, Woodard argues that recognizing each distinct region helps people understand and accept the unique set-up of the United States.

“The country has been arguing about a lot of fundamental things lately, including state roles and individual liberty… In order to have any productive conversation on these issues, you need to know where you come from…Once you know where you are coming from, it will help move the conversation forward.